You are Here: » Joyce Morrison’s Story 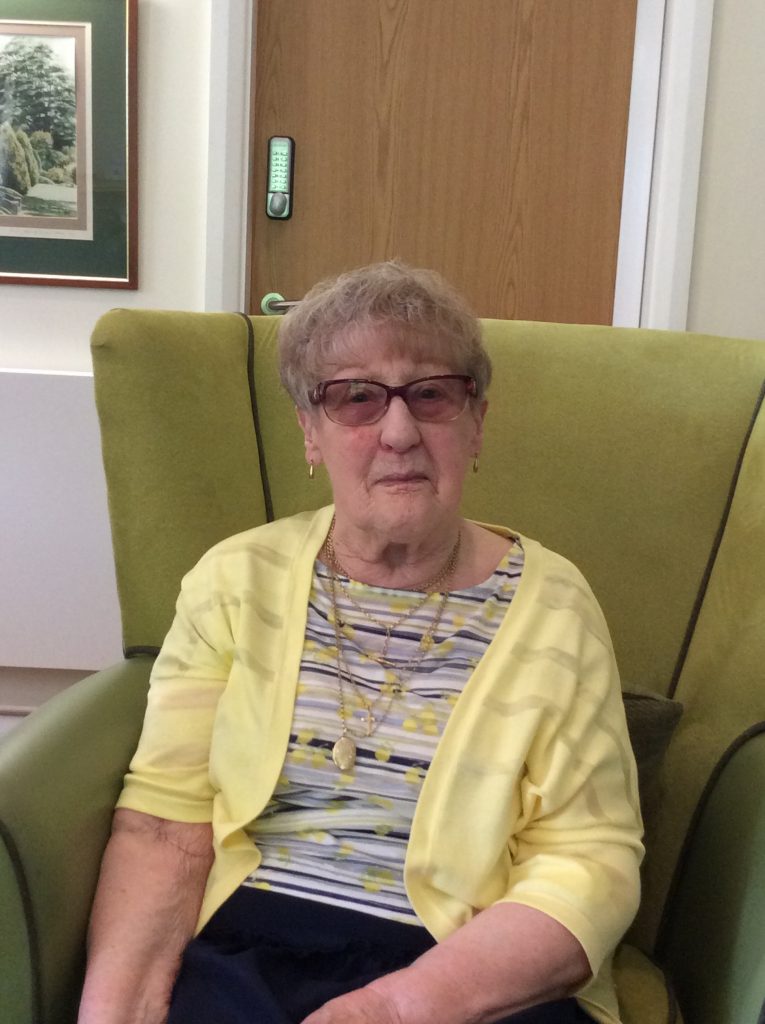 I retired in 1988 having worked as a Warden, supporting elderly people living in their own homes. I wanted to carry on doing the same thing but as a volunteer so I thought of St Mary’s Hospice. I went to see them and that’s how I got started.

I absolutely loved it, it was lovely. There was Matron Pollit and two Nurses, Jean and Mary, they were so loving and kind to all that came through the hospice. A lasting memory was of their white aprons and starched caps, they always looked so smart. There was some other volunteers only 2 or 3 though, not like today where there are lots of volunteers for different roles. There was a man called Ron who used to come in to do painting and art work with the patients too, he was really nice. We had a pin badge with our name on, not like the lanyards they have now.

I used to go on a Wednesday and a Thursday through the day then I would go back two nights a week to help. I would do the ironing, and then go upstairs on to the ward and change the water in the flowers, make a cup of tea if anybody wanted a cup of tea and things like that. I would pop into the kitchen and see if any little things wanted doing. We would just see what wanted doing and we would do it. It was good, we did everything. They would often ask if they were short in the kitchen if I could give a hand, there were two girls in there and they were lovely. I got on ever so well with all of them, it was a nice team. Of course it was just the big house then.

It is such a big change now coming up to the Living Well afternoon within the new part of St Mary’s. I haven’t been in the Orangery yet but I would like to, maybe with my Community Neighbour.

I found satisfaction that I was helping people, some had cancer, some were there for different reasons, they were not like we are today, we have more than what they had in those days; they appreciated everything that you had done for them. One lady I used to visit at home for an afternoon who had been in the hospice, I used to help do her face and hair for her.

The atmosphere, the people that worked there, it was so friendly there was nothing that you could fault. When you went upstairs on to the wards, it was only small, but you never felt it was for what it was for, it was so peaceful, I can’t just put a finger on it, but it was so lovely. You could do anything that helped and I really enjoyed every minute of it. I spent two years volunteering, I always used to park right at the top of the road it reminds me of that when I come up to the Living Well on a Wednesday afternoon.

Since being back in touch with St Mary’s Hospice I now have a Community Neighbour volunteer, it is lovely, straight away we hit it off and she is like a friend we get on very, very well. We go out for a coffee, we talk, It helps just talking, makes me feel better.

Anybody thinking of volunteering should do it. I loved it.

Joyce Morrison, Service user
Back to 30 Years of Care