You are Here: » Gary’s Story

My wife’s death although not unexpected was difficult to bear. The first weeks after are so full you have no time to deal with your grief, then when I did we were under covid19 lockdown restrictions. Fortunately, my youngest daughter was sent home to ‘work from home’ which was company for us both. Although the same person was missing from our life, grieving for your Mum is different from the grief you feel having lost your Wife.

I really didn’t know how to cope with how I was feeling in those early days of the bereavement – my head was all over the place.

I had met Linda Nott, St Mary’s Family & Bereavement Services Support Worker, on a number of occasions when we were seeking respite for Moira and she had made contact with me by text from holiday when she heard Moira had died. So her telephone call when she returned from holiday was most welcome.

I felt when I was talking to Linda I was being listened to and after the first couple of calls Linda was offering me relevant advice because she had got to know me well enough to understand how to help constructively. We talked about how to focus on the happier times spent with Moira and to bring them back to life for me. I said a lot of happy times were spent walking the Lakeland Fells – ‘bagging’ Wainwrights – which I had introduced Moira to when we climbed Catbells together in 1984 on one of our early dates.  This developed the original idea into a plan to complete the 94 ‘Wainwrights’ Moira was unable to climb in her life-time, carrying Moira’s ashes to each of them. Linda also knew I enjoyed drawing and suggested I draw from photographs of Moira in places we loved to go. I have now completed five of these and find it emotionally uplifting, absorbing myself into the memory the drawing recreates. 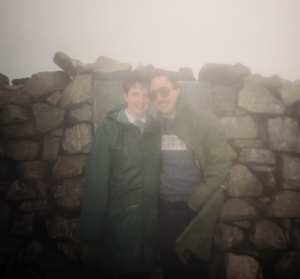 On becoming bereaved you will often hear it be said “I know how you must feel”; yet no one can as no one has lost the person you have lost nor can know what they meant to you. The St Mary’s Hospice Bereavement Support Service understand this, but they listen to you and because of that they offer genuine practical advice that will make a difference.

Gary - Family Support and Bereavement Service
Back to Patient Stories